Photography rules of composition: it’s time for my last one. Find out what the "major – minor" rule is all about, and how to use it to improve your photography.

If you have more than one significant point of interest in your image, then it’s recommended to have an odd number. Why? This tends to keep your eye moving around the image.

The "major-minor" rule refers to having one primary, or major element in the photo, and then a secondary, minor repetition of it. The repeated object is less dominant in the image. This is usually accomplished by making the minor element smaller, but sometimes by having it be less in focus. The minor element is like an echo of the major one — the same, but softer. 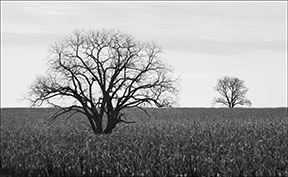 The large tree is the "major" element, and the smaller is the "minor" element.
© Julie Waterhouse Photography

If you have two significant points of interest in the image that do not follow the major-minor rule, but instead are of equal visual weight, then your eye plays "ping pong," bouncing back and forth between them. 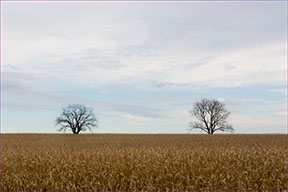 For this reason, one element should be reduced, allowing the other to take second stage. The second, minor element then acts as a balance.

Here is another example of the major-minor rule at work. It’s quite simple. One dominant object, and another just like it, but reduced in impact. 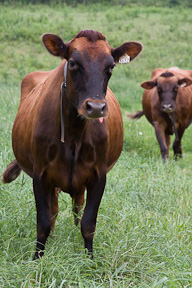 The second cow is a lesser echo of the first.
© Julie Waterhouse Photography

In the following photography composition, the major-minor rule is extended somewhat to include not just a simple object, but a larger picture element. The lower line of vegetation in the image is the major center of interest. The secondary line above provides a minor reflection of it to provide balance to the image. Without the detail of the vegetation, the upper line is reduced in visual weight. 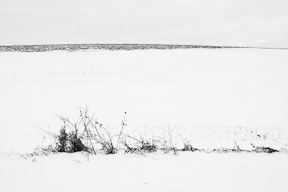 The top line is a lesser echo of the bottom one.
© Julie Waterhouse Photography

That’s it for photography rules of composition! Next you may want to learn about cropping photos to improve your compositions.